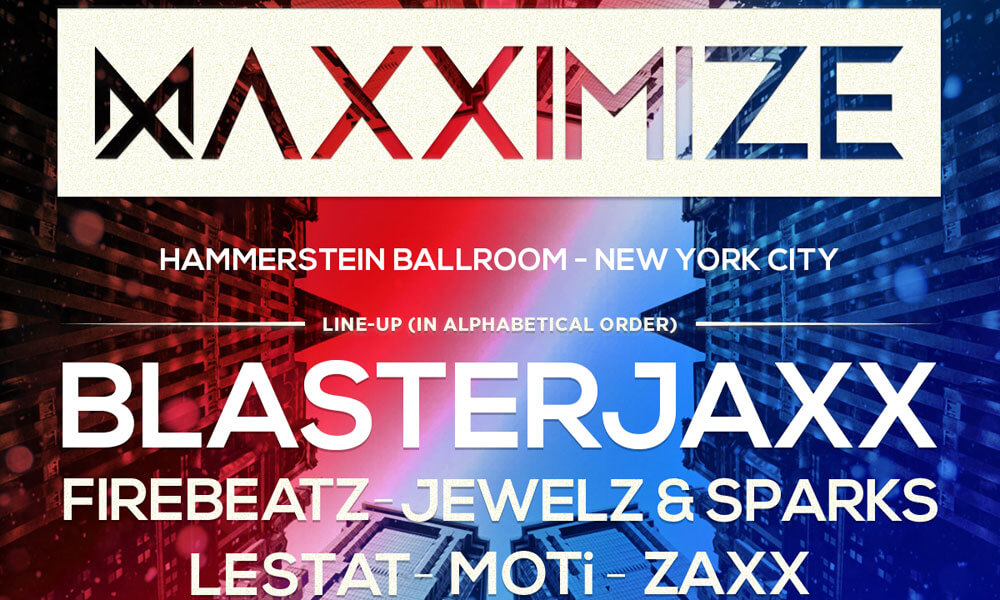 Now that your New Year’s hangover has subsided, it’s time to start planning for 2016! Blasterjaxx, one of the biggest acts in EDM, are bringing their MAXXIMIZE imprint to New York City’s historic Hammerstein Ballroom for the first time in the city since they sold out Governer’s Island in August, and they have some very special guests joining them for a night of huge sounds, world-class indoor production, and all out madness!

Fresh from conquering the Beatport Electro charts with their track ‘Home’, fellow Dutch duo Firebeatz will follow up headlining dates in Bolivia and the Philippines as main support at MAXXIMIZE. Alongside them will be Jewelz & Sparks, coming off of a run that has seen them drop huge releases on Musical Freedom, Spinnin’ and Doorn, and Tiësto’s favorite protege, the incredibly talented MOTi, will unleash his vision of melodic big room house music on the NYC audience. Rounding out the bill are two of New York City’s fastest rising stars, Zaxx and Lestat, who should be no strangers to lovers of bangin’ progressive house.

The event will be produced by Dutch powerhouse party promoters ID&T, who rarely bring their massive imaginations indoors in New York. Expect state-of-the-art sound and light, an enormous crowd, and some of the best party music in the world in a venue that only opens its doors for dance music on very special occasions.

MAXXIMIZE is set to be both the biggest and the hottest EDM event during a week that will see President’s Day, Valentine’s Day, and New York Fashion Week descend on the Big Apple. The show is 18+, get your tickets for Blasterjaxx MAXXIMIZE at the Hammerstein Ballroom on http://Blasterjaxx.com/NYC